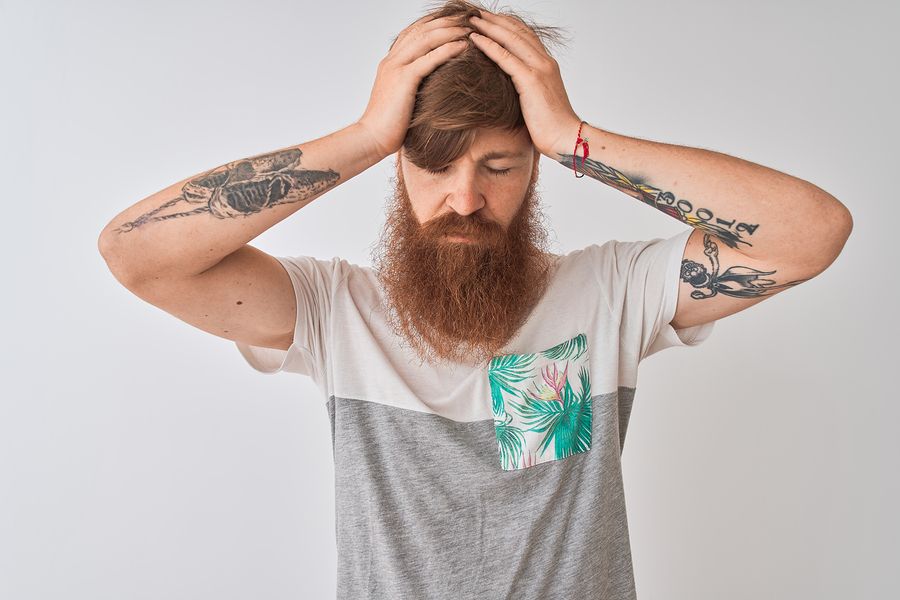 Tattoo removal has been around for almost as long as people have gotten themselves inked.

And thanks to advances in tattoo removal technology, we’re at the point where getting a tattoo needn’t be permanent anymore.

Today, we’ll explain the mechanics behind laser tattoo removal, including how many sessions it typically takes. While we’re here, we’ll also bust some of the most persistent myths.

So, let’s get started!

Why get tattoo removal?

There are many reasons to get tattoo removal.

In other cases, the reason isn’t quite as solemn. Maybe you’re unhappy with the workmanship on your tattoo, and have been thinking about removing it for a while now.

It could be that you’ve simply grown to dislike it.

Sometimes, your old tattoo can be reworked into a new design. Tattoo cover up preserves your existing tat, giving it new meaning.

In other cases however, you may feel more comfortable with all traces of your tat gone altogether. In these instances, tattoo removal might be closer to what you want.

In the past, the only way to remove a tattoo was to remove the layer of skin where the ink settled – a painful procedure that often left scarring behind.

Luckily, those days are long gone!

This heat causes ink molecules to break apart into smaller particles, which your bloodstream is able to carry away.

Laser tattoo removal makes use of a special laser known as a Q-switched laser, which is a large and powerful medical-grade laser.

Instead of prolonged exposure, the laser works in short bursts. This protects you from the extreme temperatures involved, and helps minimise damage to your skin.

Unlike traditional lasers, Q-switched lasers can also operate in a variety of different wavelengths, making it suitable to target different inks and colours.

Can a tattoo be removed in one session?

The truth is, it depends!

How many sessions you’ll need to remove your tattoo comes down to:

As a general rule, however, only the smallest minimalist tattoos can be removed in a few session.

Think of it like chipping away at a block of wood – each session removes a little bit more, until you achieve the results you want.

Most people requiring multiple sessions spaced out with several weeks between to allow your skin time to recover.

The only way to know for sure? Get in contact with Tailored Tattoo Removal.

The team are happy to arrange a free consultation to discuss your goals and give you a rough timetable.

At Sin City, our Essendon tattoo artists don’t do things by halves.

When it comes to tattoos, we want you to be 100% confident, informed, and importantly, happy!

While we mostly concern ourselves with the process of getting a tattoo and the lead-up to that, there are also a lot of myths and misinformation surrounding laser tattoo removal.

To ensure that you’re making an informed decision, we’ve gathered some of the most common myths about this misunderstood procedure, as well as the truth behind them…

The good news is that laser tattoo removal is a safe process with only short-term side effects.

As we mentioned above, Q-switched laser work in short bursts, dramatically reducing the risk of negative side-effects.

Your Essendon tattoo removalist will also prescribe a detailed aftercare plan to ensure that your skin heals properly between sessions.

This will minimise the risk of damage, and ensures your tattoo removal is completed with minimal drama.

This one is false – anyone who claims their over-the-counter cream can remove tattoos is outright lying to you!

That’s because tattoo ink settles in the dermis, which is a deeper layer of skin.

Creams however only sit on the surface, and don’t penetrate – it’s physically impossible for creams to have that kind of impact on your tat.

Myth #3: All tattoos are equally easy to remove

As we mentioned above, not all tattoos fade after a single session – depending on a range of factors, it’s likely you’ll need to book in several sessions to get the results you want.

In particular, we’re going to expand on the effect ink has on tattoo removal.

Generally speaking, black ink tattoos are easier to remove than lighter colours. That’s because darker inks are more “absorbent” so to speak, as they absorb more wavelengths.

By contrast, colours such as yellow, blue, white and purple can be more challenging as they reflect certain wavelengths, reducing the effectiveness of the laser.

Specific wavelengths may be needed to break-up these inks.

Some tattoo artists may deposit inks more deeply, which can also increase the number of sessions needed.

In short, it all depends!

Generally speaking, the only time your laser tattoo removal will leave scars behind is if:

Luckily, very few of these problems are inherent to the procedure itself.

During the initial consultation, Tailored Tattoo Removal will ask about each of these, determining whether or not you’re at risk of any of these complications.

Once we know, we’ll provide our recommendations, creating an aftercare program and prescribing products that will minimise the chances of scarring.

Talk to our Essendon tattoo artists about tattoo removal

We’ve all had regrets. Luckily, your tattoo doesn’t have to be one of them!

Whatever reason you have for removing your tattoo, laser tattoo removal can help fix tattoo-related cases of buyer’s remorse.

You can also visit our Essendon tattoo studio in person – walk ins are more than welcome!